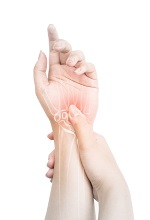 It's one of those things you find when you're cleaning out a drawer â a magnetized bracelet or a copper one. Maybe it was a gift or you bought it off a late night TV commercial. Millions have believed in the healing powers of copper and magnets - from ancient civilizations such as the Sumerians and Egyptians to legitimate modern uses such as copper IUDs for birth control.

But many of the claims for their healing are not confirmed and a recent study found no evidence that copper or magnets help rheumatoid arthritis patients. Seventy patients aged thirty-three to seventy-nine were randomly divided into four groups. Each received either a standard magnetic wrist strap, a weak magnetic wrist strap, a demagnetized one or a copper bracelet. No one knew what bracelet they had on.

All the straps were worn for five weeks then the scientists measured the extent of joint pain and swelling, inflammation, physical function and the medications each patient took. They found no statistically significant differences between the four devices in any of the measures. An earlier study had the same finding.

When they placed strong magnets on the knees of sixty-four people with knee pain for a week, there was no effect on inflammation, pain, or functioning. Even though these products have no measurable benefit, the studies also don't show that they're harmful. So, if you think the copper bracelet your mom gave you soothes your wrist, go for it. But if you were about to buy one, we'd say save your money.

Copper Bracelets and Magnetic Wrist Straps for Rheumatoid Arthritis â Analgesic and Anti-Inflammatory Effects: A Randomised Double-Blind Placebo Controlled Crossover Trial
Folklore remedies for pain and inflammation in rheumatoid arthritis include the application of magnets and copper to the skin. Despite the popular use of devices containing magnets or copper for this purpose, little research has been conducted to evaluate the efficacy of such treatments...

Can Copper Cure Pain?
Arthritis sufferers swear by copper bracelets and creams. But the metal's real benefit is more than skin deep...

Opinion: The crucible
Copper doorknobs could be the latest - and oldest - way to beat the bugs, says Philip Ball. In what sounds like a rather literal interpretation of the old Yorkshire proverb that where there's muck there's brass, a hospital in Birmingham, UK, is hoping to stamp out its superbugs by replacing all its metal fittings with copper ones. The aim is to exploit the discovery, made at the University of Southampton three years ago, that methicillin-resistant Staphylococcus aureus (MRSA) die within an hour or so on copper surfaces, whereas the bacteria survive for days on stainless steel. Indeed, brass - copper alloyed with zinc - performs even better than copper...