Death of a President
mp3 | wav 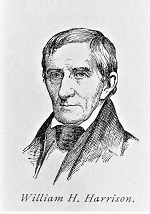 Many of us were waiting to hear President Trump's condition after learning he got COVID-nineteen. Over a century ago, Americans also had an ill president, William Henry Harrison, who it turns out did not recover.

Harrison was sworn into office in March of eighteen-forty-one and died just one month later. New information now disputes that his record long inauguration speech in the cold and rain killed him. But cold and rain did contribute to his death. Three weeks after inauguration, he went to the market in the cold rain without a coat and then failed to change out of wet clothes back at the White House.

Scientists also believe the arduous campaign, and his age of sixty-eight, the oldest president up until then, made for a weaker immune system. He went to the market on a Wednesday morning and by Friday a doctor arrived to find him with a severe chill. He was treated with a mustard plaster and laxative. By Sunday, he had a severe pain in his side, so they began bleeding him, used heated cups to increase blood flow, and castor oil to induce vomiting. After developing pneumonia in one lung, doctors gave him a brandy toddy, opium and a Native American remedy to aid the respiratory system. The newspapers said he was better but after ten days of fighting for his life, President Harrison died on April fourth before his wife moved to Washington to become first lady.

Pneumonia killed the president in 31 days. His doctors were accused of incompetence.
"We are happy to announce that the health of the president is decidedly better, the disease with which he was afflicted having assumed a more favorable aspect,â a Washington newspaper reported. The president was William Henry Harrison, who had been sworn in on March 4, 1841. On the day the news article was published, April 1, 1841, Harrison actually was fighting for his life....

William Henry Harrison's Secretary Announces Harrison's Impending Death
At the age of sixty-eight, William Henry Harrison had already lived twice as long as the average American; been elected, in 1840, the oldest president yet; and in a stunning display of vigor and health, dared deliver bareheaded, sans overcoat or gloves, an hour and forty-five minute Inaugural Address on a freezing cold day. Now, four weeks later, he lay dying, mostly of pneumonia...