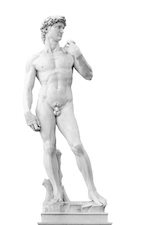 Michelangeloï¿½s David is among the most well-known and beautiful of statues. But no one in the five hundred years since it was carved had pointed out a detail until a cardiologist noticed it recently. Thereï¿½s a bulging vein on Davidï¿½s neck which youï¿½d normally see in heart disease patients and that doesnï¿½t align with David, a vibrant teen just before his battle with the giant, Goliath.

Michelangelo carved David when he was only twenty six after heï¿½d been studying the cadavers of criminals, learning every muscle, bone and blood vessel, including the jugular vein that bulged from Davidï¿½s neck. But corpses would not have had bulging jugular veins. Plus, how the circulatory system worked wasnï¿½t known for another century.

However, this vein also bulges when people are excited or physically labored and David was about to take on a giant! Michelangelo somehow learned that a bulging jugular vein was a sign of increased blood pressure that can happen before a fight or when working hard. He might have noticed the vein bulging in workers who mined marble or people in dangerous situations, and this may explain why he carved one in David.

He also included the feature in his statue of Moses at the Tomb of Pope Julius the Second, but he knew not to on the recently deceased Jesus depicted in the Pietï¿½. Thanks to Michelangeloï¿½s keen medical observations, he has created a body of work that has inspired generations.

How an Indiana doctor found a medical mystery in Michelangelo's 'David'
While art historians have studied Michelangeloï¿½s "David" for centuries, it took the eye of a Marian University cardiologist to see something no one else appears to have recorded about the iconic marble sculpture...

The David Sign
On a recent trip to Florence, Italy, I observed Michelangeloï¿½s David in the Accademia Galleria and was struck by an interesting observation: the external jugular vein on the right side of Davidï¿½s neck is distended well above his clavicle...

Basic and Fun Facts About The David
Accademia.org is an informational guide written by a team of locals that love Florence and art...