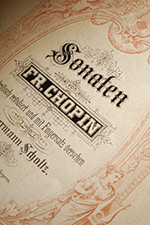 Historyï¿½s many music prodigies produced amazing masterpieces. Among them is Frederic Chopin who left us not only his beautiful music, but his heartï¿½ literally. Yes, his heart is kept in a jar at the Holy Cross Church in Warsaw, Poland.

Just before his death in eighteen-forty-nine, he asked his sister to have doctors cut him open after he died to avoid the risk of being buried alive, which was a common fear during that time. They did cut out his heart and preserve it in cognac where it stayed until two-thousand-fourteen when scientists were invited to study it.

Why? Chopinï¿½s death has long been a mystery. He was a child musical prodigy who published his first work by age seven, performed regularly in his teens, and eventually settled in Paris. But at the age of twenty-nine he fell ill and doctors diagnosed him with consumption, what we now call tuberculosis.

A decade later he died and even though doctors did an autopsy, including removing his heart, the report has long been lost. This led to speculation he instead died of cystic fibrosis which increases a personï¿½s risk for lung infections or a narrowing of the heart valves.

So what did scientists find when they studied Chopinï¿½s nearly two hundred year old heart? Well, they were only allowed a close visual inspection through the jar. Even so, they concluded Chopin had chronic TB and in the last months of his life suffered from a rare complication of TB called pericarditis which is an inflammation of the membrane surrounding the heart. Since the scientists could not actually take tissue samples, this study really is not conclusive.

We can say, however, that their hearts were in it, even if Chopinï¿½s wasnï¿½t.

A Closer Look at Frederic Chopin's Cause of Death
The great Polish composer and pianist Frederic Chopin was born in 1810 in Zelazowa Wola near Warsaw and died in Paris at the tragically young age of 39 years. The issue of which chronically progressive, debilitating disease led to the death of the composer still remains disputable; the autopsy record was lost, and only anecdotal reports are available...

Frï¿½dï¿½ric Chopinï¿½s telltale heart
Scientists have written another chapter in the curious case of the composerï¿½s heart. But it is unlikely to be the end of the story...