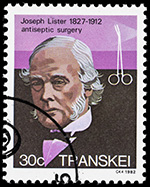 Imagine facing surgery without anesthesia, in a smelly operating room and the surgeon enters wearing a blood stained apron. I would run screaming out the door. You and me both. Yet, prior to about the 1840s, that was how surgery was done. Surgeons did not wash their hands, instruments were not sterilized, and patients were held down on the table.

Even though as early as 1546, Fracastro of Verona postulated that small germs could cause diseases no one linked them to wound infections. A clue came later from Louis Pasteur who showed that microorganisms could sour wine, beer and milk and expanded that into a theory that germs caused diseases. In 1862, he invented pasteurization whereby bacteria could be killed by heating.

Later a British surgeon, Joseph Lister built on this knowledge to change surgery forever. He read Pasteurï¿½s work and theorized that germs cause infections. At the time, so many people died after surgeries that there was a call to abolish the practice.

Lister decided to begin treating all wounds on his wards with dressings soaked in carbolic acid because he had learned that the same compound was being used to disinfect sewage. He then began hand washing, sterilizing instruments and spraying carbolic acid in the operating room during surgery.

Other physicians criticized him even though Lister achieved remarkable success. But in time, his methods were adopted in Germany, the US, France and then Great Britain. Heï¿½s hailed as ï¿½Father of Antiseptic Surgeryï¿½ and saved a huge number lives.

Brought to Life: Joseph Lister (1827-1912)
Joseph Lister is the surgeon who introduced new principles of cleanliness which transformed surgical practice in the late 1800s...

Louis Pasteur Biography
Louis Pasteur (1822 ï¿½ 1895) was a French chemist and microbiologist who developed antidotes and cures to many dangerous illnesses such as anthrax and rabies. He also successfully invented a way to pasteurise milk and make it safe from tuberculosis...