The Neanderthal in Us
mp3 | wav 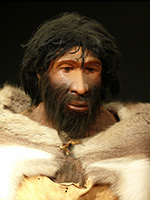 When we were teenagers, my cousin used to scream - ï¿½David, you are a Neanderthalï¿½. And back then, she was at least partially right. New research suggests that as a person of European descent, I could blame my genes. Thereï¿½s apparently a significant amount of Neanderthal DNA in our genome.

The difference in the sequences between the oldest and newest individuals is small suggesting that Neanderthals lived in isolated communities. So, where and when did the interbreeding occur? Previous studies had confirmed that modern day Africans do not have Neanderthal genes, which suggests the interbreeding with Homo sapiens happened after they left Africa.

Scientists now place the amount of Neanderthal DNA for West Asians and Europeans at about two to three percent. And theyï¿½ve identified sixteen gene variants in our genome that clearly have Neanderthal origins. These gene variants affect a range of functions in us such as allergies, depression, blood clots, immunological disorders, cholesterol levels, and belly fat. Another study found that the Neanderthal gene sequences present in Europeans could influence Vitamin D levels and subsequently how we react to sunlight exposure, our hair color, and sleep patterns.

Ugh...sleep and weight, two challenges most of us struggle with. Good thing being Neanderthal makes me better looking...Oh the lies we tell ourselves.

Neanderthal DNA contributes to human gene expression
The last Neanderthal died 40,000 years ago, but much of their genome lives on, in bits and pieces, through modern humans...

Is your Neandertal DNA making your belly fat? Ancient genome offers clues
The insult "You're a Neandertal!" has taken on dramatic new meaning in the past few years, as researchers have begun to identify the genes many of us inherited from our long-extinct relatives...