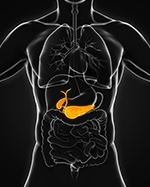 Most cancers of the pancreas are not discovered until people are in stage three or four. Sadly, only five percent are alive five years after diagnosis. A new test, though, could be a lifesaver if it proves to be effective in detecting the cancer early.

The pancreas sits behind the stomach and helps regulate blood sugar and aids in digestion. Doctors diagnose pancreatic cancer by imaging or doing a biopsy. By then the cancer has usually spread to major blood vessels, lymph nodes, and other organs.

In the study, the new test uses just one microliter of blood, which is less than one drop of water. It was able to detect pancreatic cancer in more than ninety percent of those with the disease. It also did not falsely diagnose a group of healthy people and others with an inflamed pancreas. The test measures small balloon-like structures that cells release into the blood stream called extracellular vesicles.

Pancreatic cancer cells release vesicles with a different protein on them than normal cells. Scientists developed gold nanoparticles on a sensor chip that bind to these pancreatic cancer extracellular vesicles. This binding causes a change in the intensity and color of the light the nanoparticles emit. It was able to diagnose seven patients with early stage pancreatic cancer. Tested again after surgery to remove tumors, lower levels of the extracellular vesicles were detected.

More work needs to be done on the new test, but if successful, it could be the first major advance in pancreatic cancer detection, which would be a huge boon to humanity since the disease is expected to be the second cause of cancer deaths within a decade.

Blood Test Could Catch Pancreatic Cancer Before It's Too Late
Pancreatic cancer is known as the "silent killer" because it is usually too advanced to treat by the time symptoms arise...

Pancreatic Cancer
If you have pancreatic cancer or are close to someone who does, knowing what to expect can help you cope. Here you can find out all about pancreatic cancer, including risk factors, symptoms, how it is found, and how it is treated.

The Puzzle of Pancreatic Cancer: How Steve Jobs Did Not Beat the Oddsï¿½but Nobel Winner Ralph Steinman Did
Despite having the same name, the diseases that killed Apple co-founder Steve Jobs and 2011 Nobel laureate Ralph Steinman are different kinds of cancer. Researchers are looking for new ways to diagnose and treat both.