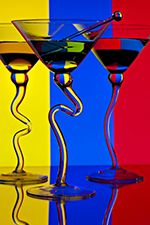 Our love affair with alcohol began not nine thousand years ago as most scientists had thought. That was when the first cities began in the Middle East when people probably discovered that fermentation preserves food. But scientists now have evidence to suggest our ability to metabolize alcohol is at least ten million, yes, million years old.

One theory posits that early primates began eating low amounts of alcohol some eighty million years ago when flowering plants first began producing fruits. These fruits became infected with yeast capable of fermenting the sugars stored within. Then, as primates began leaving trees and living below, they would have eaten fallen fruit at various stages of fermentation with even higher levels of ethanol. This was probably an evolutionary advantage over other animals that couldnï¿½t break down ethanol.

To determine when our ancestors developed the ability to metabolize ethanol, scientists looked for an enzyme called ADH IV in primates along the evolutionary tree including humans, bonobo, gorilla, chimpanzees, and aye-aye, a type of lemur. They looked for when there was a molecular change in the gene encoding the enzyme that made it more active against ethanol.

Of the nineteen primates along a seventy million span of the evolutionary tree, only hominids and four primates have the enzyme. This group split off thirteen to twenty million years ago, which corresponds to our enhanced ability to enjoy alcohol. Even today primates with the enzyme can eat lower quality, partially fermented foods regardless of availability, unlike other primates.

Who knew happy hour began so long ago??

Human ancestors developed a taste for alcohol 10 million years ago